Mucking around with Intersection Observer API

After working with scroll event listener & getBoundingBox to create a slide-in/up effect, as well as topPostion to make a sticky navigation and needing to calculate positions and recalculate positions I decided to see if there was a better way to trigger transitions and animations in JavaScript. The main reason I decided to investigate was that I could just picture for complex or multiple animations my code would become complex very quickly.

Related: How do I make an element slide in with 4 lines of JavaScript?
Related: How to make the Top Navigation background colour and size magically change on scroll

After researching, the Intersection Observer API came up as a solution. Sorry, I don't really know where and when I was pointed towards this, as I have spent a lot of time in the last few years mucking around with code and on MDN reading, but I am glad I took the time to look at it. On MDN it explains the Intersection Observer API was created to solve issues of browser performance that other methods have of working out the intersection of elements. In their words, using other methods to build up the necessary information becomes "unreliable and prone to causing the browser and the sites the user is accessing to become sluggish" and "since all this code runs on the main thread, even one of these can cause performance problems". Boom! exactly what I was thinking!

If you want to trigger actions based on scroll the Intersection Observer API is what you need as the performance is better than using other methods as it hands off all the work to the browser instead of needing the browser to parse, compile and run multiple lines of codes in the main thread. That's it, the Intersection Observer API gives greater performance.

How to set up Intersection Observer API

In this part, we will look at the set-up in more detail. I have broken it down into the steps below in a way that makes the most sense to me, I hope it also helps you.

Before we start we will need some HTML. We can use the same code from Github for the How to move an element in JavaScript article. Please follow the instructions from here on how to do that if you are unsure. If you use this repo remove all the JavaScript except the first line; const three = document.getElementById('three');

Okay, now we have a nice set up let's start writing some JavaScript code!

So this is our code so far.

Now that we have the options set the Intersection Observer API is ready to be used. However, as such nothing will happen as we need to create the callback function. The callback function will perform some action and will be custom JavaScript code so the sky is the limit.

Let's take a look at what happens when the Intersection Observer API is run. When the target crosses into the root element.

The Inner workings of the API 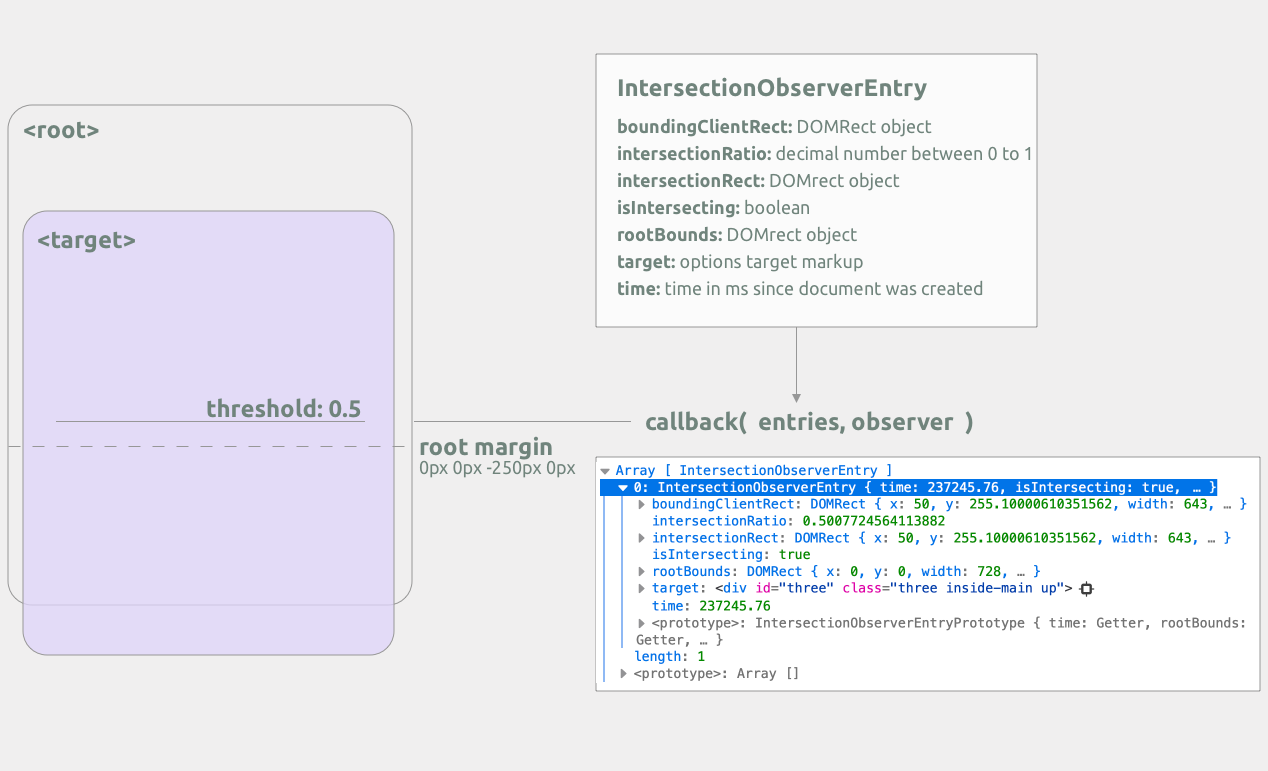 In most examples, I have seen these are passed back in as entries but you could use any name, in fact on W3C they are passed in as changes, but since the interface is named IntersectionObserverEntry let's use entry.

To see the values of the entries as you can see in the above illustration you can console.log them using console.log(entries); inside your callback function.

Okay, so we have a lot of properties with values we can use in our callback. So let's do something simple using the isIntersecting property.

Remember you can use an array of values for the threshold. How exactly does this work? If you use an array for the threshold option every time a threshold value is hit, the list of IntersectionObserverEntry interface properties is passed into the callback function. In this case, you would need to use a property other than isIntersection. The most likely property you would use is the intersectionRatio property. I will be looking at a more complex example in the weeks to come.

That's about it, under the hood this is what happens when you create a new intersection observer. Once you grasp this the sky is the limit and only your imagination and creativity and knowledge of using JavaScript will stand in your way.

On MDN there is an interesting demonstration where the threshold is an array and it changes the hue. When I first read that it seems quite confusing to tell the truth and thus I had to write it out in my own way. I suggest you look at those examples, however, as they are quite interesting. In a following article, I am going to add another example that works on adjusting the transform of an element on scroll using an array of 5 threshold values and also play around with colour a bit more so be sure to sign up for the newsletter and be the first to know.

Thanks for reading and look after yourself!  Carpe Diem!